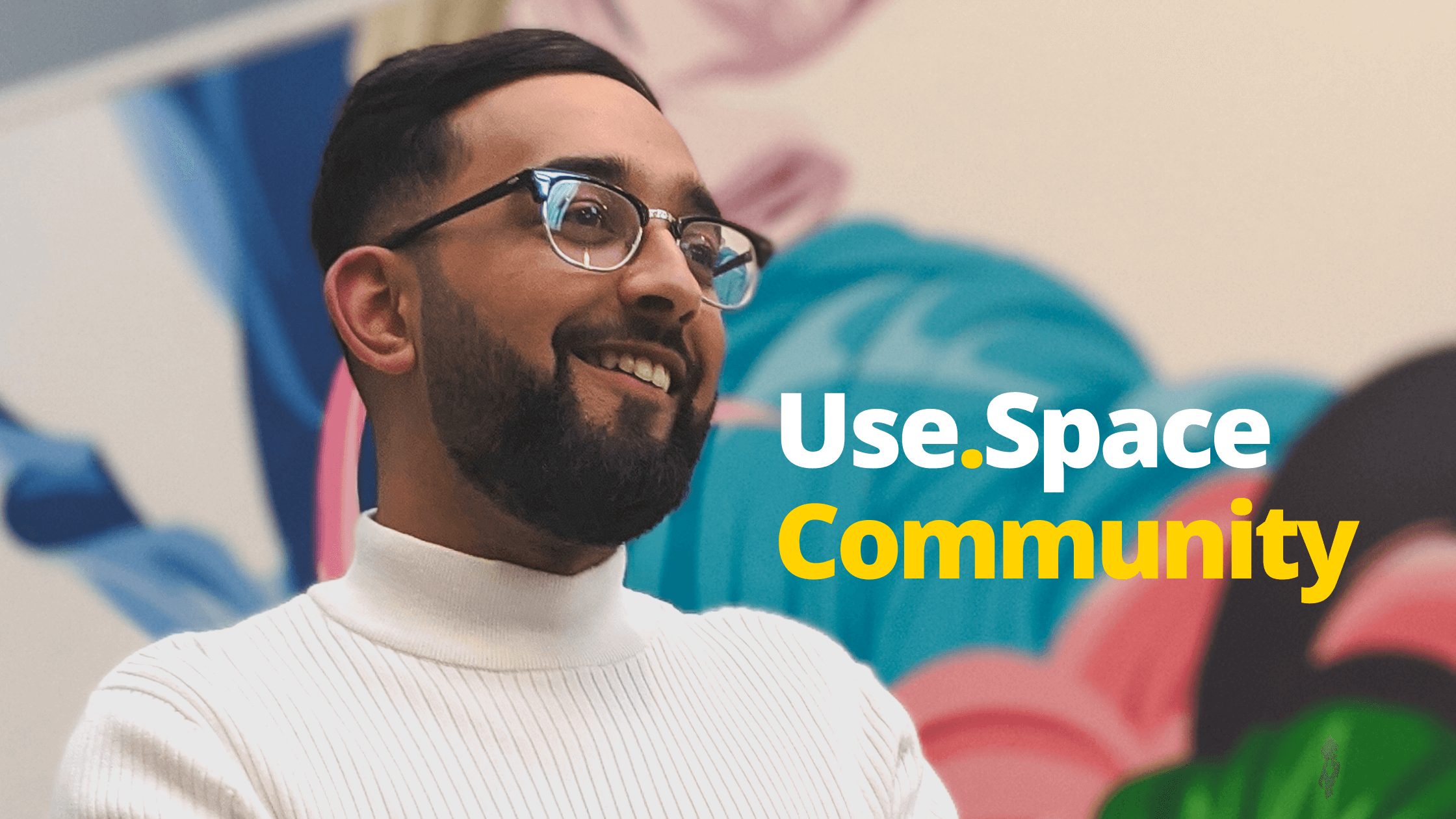 An inspiring message for the next generation from award-winning entrepreneur, Hassan Iqbal.

Every month we speak with one of our Use.Space members to give them a chance to shout about the amazing work they’re doing. This month we’ve been chatting to Hassan Iqbal, CEO of Creative Pixels.

Having been a member of the Peter Jones Foundation (yes, that Peter Jones of Dragon’s Den fame), Hassan has now headed back as a newly appointed member of their Youth Panel. Uniquely qualified to lift up the next generation after starting his first business at the very young age of 13, Hassan is now a successful and award-winning entrepreneur.

1.     So, jumping straight in, why did you start your first business when you were 13 and where did your entrepreneurial confidence and spirit come from?

I think I started quite early on, around 8, I kept breaking computers and my Dad said ‘If you break another computer I’m going to break your legs’, so I learnt how to fix it. Every time I broke it, I went about fixing it again. Then when I went to high school it was actually one of my teachers who suggested I make fixing computers into a business. I remember thinking ‘a business at 13, who the hell does that’ and I suppose I was the one who did it.

So I started charging family and friends to fix their computers. I actually got some press coverage which was wow, great. It was 2008, around the time of the recession and I remember seeing my Dad struggling to find work. Interview after interview, and I suppose that’s when I knew I liked being my own boss and I could control my own destiny.

2. Did you ever want to be out with your mates, not working?

Yes, and no. It was weird doing what I was doing but it was also amazing. I did want to relax but I was earning money and making a name for myself at thirteen. How many other people can say that?

3. You delivered a TedX talk on ‘Breaking out of the Norm’ when you were only 18 years old. How did you come across that opportunity?

They reached out to me. They were looking for a speaker and they found me. I wasn’t very confident in the gig but you don’t turn down a TedX. It was about how I was (similar to your first question) doing things at thirteen and even then [at eighteen] that was different from other people my age. Being comfortable in breaking out of the norm.

The audience was fairly young, well, depending on your definition, but they were in their thirties, early forties and what I wanted to convey to them was my story and help them see that if they give young people opportunities and actually listen to them you are able to get more out of them. There are amazing things young people want to do, but they are stuck in this definition of what young people are capable of and the rigidity of a system that doesn’t allow them to surpass expectations. Although I think there is more of a change to seeing beyond academic skills, and that BTEC and other practical qualifications are being taken more seriously.

It refers back to my own experiences of applying to The University of Manchester. I got rejected. I was one grade lower than what I needed on my GCSE English, even though I got a triple distinction star on my BTEC. I wasn’t able to get in.

But then two years later I’m stood doing a TedX talk hosted by The University of Manchester.

5. Were The University of Manchester aware of this?

Yeah, I said to them what was your reasoning for it? They claimed it was because I wanted to do business and that isn’t the same as enterprise. In their eyes I do enterprise. This has influenced my support and engagement with incubators and co-working spaces. I feel they foster an environment for better business (or enterprise) because you’ll find more people there breaking out of the norm and doing things the way they want to, and doing them successfully. Despite definitions.

4.     Would you give exactly the same talk now or make any changes?

I think in terms of the context and the message I’d absolutely say the same thing and my philosophy hasn’t changed when it comes to breaking out of the norm. I stand by that.

5.     Tell me about your recent appointment to the Peter Jones Foundation Youth Panel and why you decided to apply?

I’ve been really passionate about the Peter Jones Academy since I joined as a student. Mainly because it’s taught me different stuff. I’ve been to university and what I learnt at the academy has been more useful to me than what I learned in those three years. I think the skills, the enterprise lessons, they made you pitch, they made you go for funding and it makes you confident. For me, I see so many opportunities for young people with this Youth Panel. Also, for myself, the chance to improve your skills has to be constant and the academy offers that. Now for even younger people. I wanted to be a part of that.

4.     Your mission on the youth panel is ‘to create robust pathways to employability and entrepreneurship’, how do you feel your role and experience can help achieve this?

I think with the panel, it’s great that there is a range of different people and we’re all different ages. People still in college, some in university, myself and another alumni of the academy. I think the fact that a couple of us have gone through that system, and luckily I’ve also gone through University, I’m able to see what’s good and what’s bad. I can share that with people coming up through it. We’re creating a community. If we can build on that we can mentor young people more. Other Alumni and I are able to use our contacts to find young people opportunities and show what the foundation is doing to even more people.

5.     Another goal of the Youth Panel is to help bring about more diversity and help break down the socioeconomic barriers for young people, is this something that’s of particular importance to you?

Yeah. I think for myself when I did my original interview for the panel I said getting young people in was important but that it was important for me to also specifically encourage people from other ethnicities, like myself, and who were coming from places where opportunities for work weren’t as available.

I think when you see someone your age running a business, especially from my hometown in Rochdale, and doing something different it can encourage them. Even more so for if somebody sees a Black, Asian or other minority person or a young person starting a business, people go ‘look at that guy, he’s doing it, I’ll do it as well’. Representation matters, you aren’t telling people to do it, you are showing them how to do it. That’s the message I want to share. You can do it.

6.     Who has been your biggest inspiration and someone you’d like to emulate?

I’m not sure about this one. I think it’s a weird combination of people who are famous and who aren’t. I’ve had some amazing mentors who are successful in business or are incredibly socially driven. Like, Adam Bradford, he’s been one of the key people who has helped me in the beginning and he works on social campaigns. Specifically now anti-gambling. To see him take on those challenges is inspiring. I’ve met Peter Jones and seeing his confidence was inspiring. Then you’ve got the like of Elon Musk who definitely thinks out of the box and doesn’t let things hold him back. I like that. I’ve never got one person that is everything to me. There are different people who you can take different things from.

I want to make sure I’m successful but also making a difference. In my current business, I’m helping businesses grow and I’m making a profit and that’s good. On the flip side, I want to make sure young people and other Asian people can have that representation. For me, it’s about values and ethics and that’s what drives me and I want to offer to others. You can always want to sit on a pile of cash, but what’s that if you don’t have the ethics and morals. That’s what I base what I do every day on, not cash.

7.     Have you ever had a moment of uncertainty in your career, given you started so young?

Everyday. Everyday. I think it’s part and parcel of running your own business or being a freelancer. You consider if it would be easier to be earning a steady income. I don’t think it’s possible for me. My friends say because I started so young I wouldn’t be able to listen to anyone. I like this. I like being able to walk in when I want and work when I want to. Having flexibility is important. It would be easier, but it would lack fulfilment. If you are running a business and aren’t uncertain that’s doesn’t make sense for me. You should always be looking at what’s next.

So we’re growing the company. I’ve gone from it being just myself in a freelance capacity to now having more designers and focusing on getting retainer clients. Growing the business on a recurring income with people who pay us for development and design. It’s not something I’ve previously focused on but it’s a big part of what we’re doing at the moment. I’m also looking to partner with more agencies. Even when I was younger I’ve always white labelled. So it’s continuing to find more opportunities to do that. Covid has had an effect on the plans for the business and what the future holds but recurring income and growing our relationships is the main focus. I want for us to be a design and development outhouse for other agencies.

9. Finally, what for you personally is success?

Good question. I’d say probably being comfortable with the business running on a daily basis and for it to self fulfil. Having more designer’s feels successful, but also that they are happy. That the work is good and we’re able to keep going.